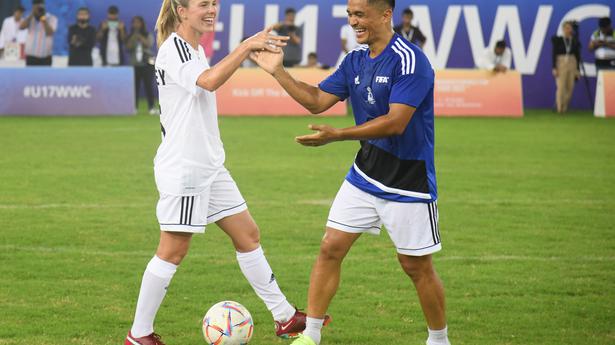 The Indian U17 women’s football team will play its debut World Cup match against the United States of America (USA) at the Kalinga Stadium in Bhubaneshwar on October 11.

The attention of the football world will be on India and the host will be up against heavyweight opponents like the USA and Brazil in Group A.

“It’s very important for India to host this women’s World Cup because it’s a platform for people to realise what is out there and the level and the standard. I also think it’s really encouraging that a little girl could go to a game and watch one of these star players and then follow their career,” Lindsay Ann Tarpley Snow, a two-time Olympic gold medallist with the USA women’s team, told  Sportstar. Tarpley was in India for the official ticket launch of the U17 Women’s World Cup.

A stark example is the number of youngsters from the 2017 U17 men’s World Cup in India who are now plying their trade in the top clubs in the country. Anwar Ali, Aniket Jadhav, Suresh Singh Wangjam and Jeakson Singh Thounaojam are just a few of the many names.

Tarpley, who started playing football at the age of four, has fond memories of playing football when she was young. Her father, who was also her coach, would focus on the importance of hard work and being passionate but not at the cost of making the process a monotonous one. “When I started, it was all about having fun and learning the game but learning the game through play. I think it’s important for young kids to be passionate about what they’re doing and just to learn basic concepts such as working hard, having a goal, and trying to figure out how they can accomplish it,” she said.

For Tarpley, the process of reaching the top started with grassroots football. From her school days, her football at the University of North Carolina to her senior career, Tarpley said that her journey was a step-by-step process. According to her, footballers, especially youngsters, cannot be rushed.

“My perspective varies across being a player to now being a parent and coaching my kids, what I see is an immense amount of pressure put on these young kids to pick a sport at a very early age, but then also play on all sorts of different teams and train all the time,” she said.

“I think there must be a balance of a passion for the game and development at the same time. When I look at the situation, there are so many opportunities which on one hand is incredible because we’ve worked this hard for opportunities and different paths for kids to take. But it also must be balanced with how to develop the talent, how to make sure that they’re still enjoying the process and loving the game as they get older.”

India, over the years, has produced many female athletes who have made the country proud on the global stage and Tarpley hopes this World Cup will help women’s football in the country find its own stars.

“It’s important to take it step by step. With this the FIFA Women’s U17 World Cup starting this fall, they’ve put two different programmes in place. The first one is the scholarship fund to try to get more women as coaches or in positions of decision-making power. And that is important for girls to see that they have those opportunities,” she said.

“The second thing is for kids to be exposed to the different levels in the sport and see how much fun it is and hopefully continue to build on those pillars of foundation. Long after this World Cup, the game will continue to evolve in India.”