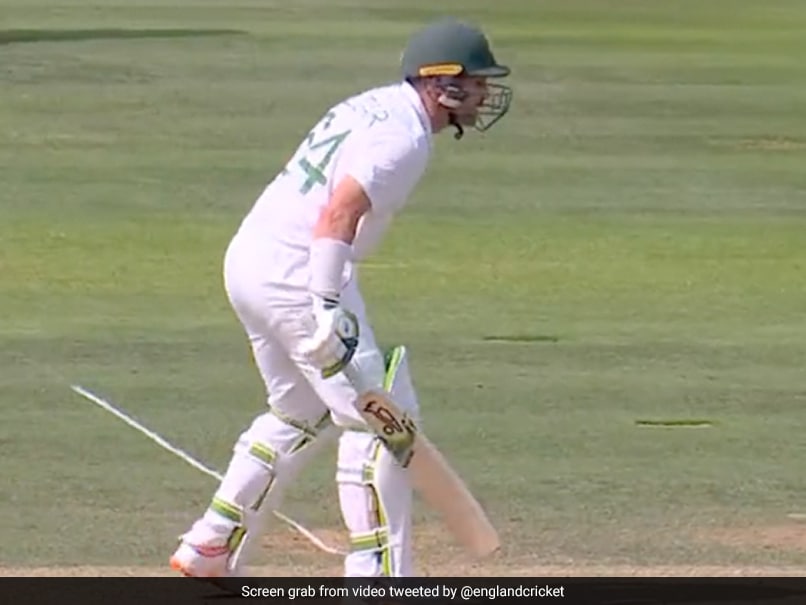 Deal Elgar was dismissed by James Anderson in his first innings in the first Test vs England.© Twitter

Kagiso Rabada took a brilliant five-wicket haul as South Africa bowled out England for a paltry total of 165 on Day 2 of the ongoing first Test at the Lord’s Cricket Ground. In reply, South Africa got off to a solid start with skipper Dean Elgar and opener Sarel Erwee. Elgar and Erwee added 85 runs for the first wicket, before the former was dismissed in one of the most unfortunate ways. Elgar tried to work James Anderson‘s delivery off his pads. However, the ball clipped the thigh guard and then bobbled back off his right arm before hitting the stumps.

The video was shared by England cricket on their official Twitter handle.

Here is the video:

Notably, Elgar was given out caught behind off Stuart Broad but his immediate review showed the ball had hit his pad rather than the bat.

Also, the southpaw was batting on seven when he edged Matthew Potts, only for Zak Crawley to drop a head-high slip catch that burst through his hands.

Earlier, Rabada finished with figures of 5 for 52 in 19 overs — the 12th time he took five wickets in a Test innings.

Anrich Nortje had followed up Rabada’s initial good work by taking three wickets, including the prized scalp of in-form Jonny Bairstow for a duck.

Ollie Pope’s 73 was the only double-figure score by a specialist England batsman, with the next-best contribution coming from England captain and all-rounder Ben Stokes, who made 20.