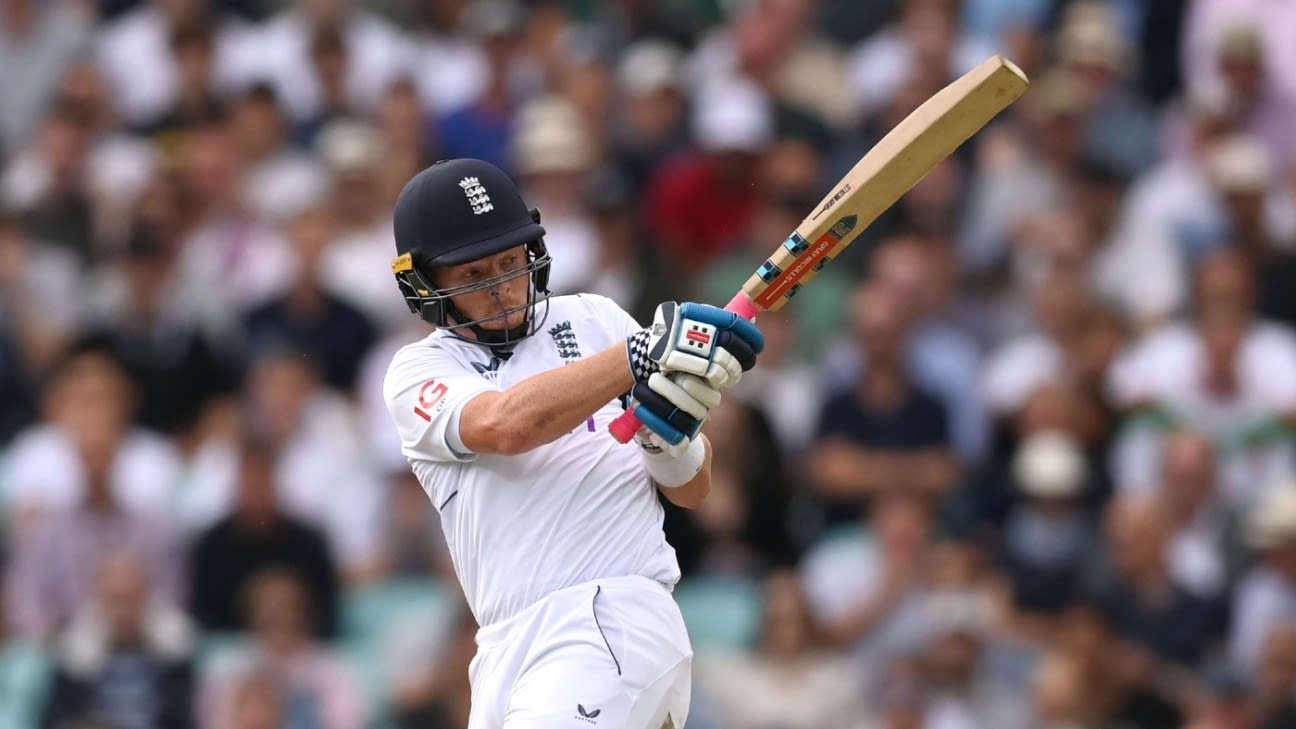 It has been four years since Ollie Pope made his Test debut as a No.6 doing an impression of a No.4. As the 2022 summer comes to an end, he looks settled in his new dwellings at No.3.
On the face of it, a season average of 38.00 might seem modest. It is, however, the highest average the 24-year-old has managed in an English summer, and there are a few other numbers that reinforce his work this campaign. He was one of England’s five century-makers with 145 against New Zealand at Trent Bridge, and no other top three batter, home or touring, made it to three figures. Only he, Jonny Bairstow and Joe Root managed four or more scores above fifty for England.
The last of those came in the final Test at the Kia Oval: an eye-catching 67 that sped England into a first-innings lead over South Africa, which was followed by a handy red-inker of 11 which bumped his career average back over thirty (31.00). In a few ways, he rates that knock, as well as the 73 at Lord’s in the first Test of this series, above that Trent Bridge century, given the tougher conditions at The Oval, with more movement through the air and off the pitch.

“It’s always nice to get those big hundreds and get those accolades,” Pope said. “But I think if you’re looking at how you’ve contributed for the team, I guess the two knocks in this series were important – although we lost at Lord’s, so it wasn’t enough.

“The knock at The Oval was probably more important in a way and looking at that bigger picture. Those innings sort of make me more proud.

“If you’re doing it in a winning cause, and they are tougher conditions, then it is nice to show you can do it in different positions, batting at three as well. So I take a lot of confidence from that.”

Understandably, some are still wary of anointing Pope as a permanent first-drop. But the man himself is comfortable enough to believe he is ready.

“I’d like to think so,” he said. “I’ve tried to stop looking at the bigger picture too much this summer, I’ve tried to just focus game by game and enjoy it, and be as ready as I can for every opportunity, rather than think ‘if I do this I might be here next week’ or ‘if I do this it might get you on the next tour’ or whatever.

“So I’d like to think so. I’ve enjoyed that position this summer, it’s been new, but hopefully I’ll be backed to do it in the future as well.”

An attempted reverse scoop went wrong for Ollie Pope, as he attempted to win the series in style•Getty Images

You’d imagine that will be the case, given there has not been a time yet when England haven’t supported Pope. His 30 caps to date are a testament to that.

That’s not to say he has not been putting the work in. Even before he called his new captain Ben Stokes at the start of the summer to put himself forward for the role he now has (having done a simple calculation it was the only spot up for grabs), he had been working to amend a technique that always made him a bit too shot-a-ball.

“I did a lot of work with Tres [Marcus Trescothick] in the West Indies and before West Indies as well,” he said. “I realised I needed to change my game slightly and tighten up a few little things, which would then allow me to become a top-order batter even though that wasn’t necessarily on the radar at the time, so I spend a lot of time with him.

“And then from a mindset point of view, I think it’s more that I had some good chats with Baz [Brendon McCullum] actually, and he’s been very much ‘stop fearing getting out in Test cricket’.

“I think because Test cricket is so important to me. I’d do anything to have a great career and play 100 Tests or whatever. I think I was almost putting myself under too much pressure, and that fear of getting out was probably getting a bit too much.

“I tried to get rid of that, and try and score my runs basically. Rather than think, ‘if I cut this I might nick it’, I [now] think ‘if I cut it and I nick it then it might go over the slips for four’. That is the mindset change I’ve tried to go by.”

Pope is not the first batter this summer to credit McCullum for ridding him of that anxiety, something that had previously been taken for granted as part and parcel of the format in this country. And the message had clearly got through by the time Pope attempted to speed the finish along in the third Test with an attempted ramp shot off South Africa’s left-armer Marco Jansen, with six remaining of their 130 target.

“I mean, my wrist wasn’t too happy with me making that decision,” he joked, after he had got himself into a tangle on the shot, and deflected the ball up off his wrist and into his visor instead. “But I just thought it was a cool way to finish things. It sort of sums up I guess a little bit what we’re about at the minute. It is about entertaining the crowd and it’s not about your individual stuff.”

As for the encouragement to embrace this kind of attitude, the messenger has been as important as the message.

“From a guy like him [McCullum], he’s got an amazing record. He had an amazing career. So he’s obviously lived by that and he realises that along the way, you’re going to get a few low scores as well.

“And it’s probably about bouncing back from that, looking at why you’ve got the low score, and not overthinking the whole situation.

Pope uses his first-innings 67 at The Oval, in which he eventually fell nibbling outside off stump at Kagiso Rabada, as an example of England’s new approach.

“I would have rather got out trying to cut that ball,” he said. “But I think, in the first innings, I had a pretty clear game-plan. I know I scored at a decent rate and I got a few things going my way, but I was pretty clear as to where I wanted to hit the ball, and what my positive options were, rather than think ‘just go smack it’.”

Having beaten all comers this summer – New Zealand, India and South Africa – Pakistan away presents a robust challenge to these newly acquired principles. The players, by and large, are unsure what the conditions will be like, with some wary of spin, some of pace and some of flat tracks, where sizeable first-innings scores will be the name of the game. Whatever awaits in Rawalpindi, Multan and Karachi, recalibration will be a necessity.

“It’s probably just that mindset,” Pope said, when asked of the most transferrable part of the summer. “It’s not just ‘go out and slog it’. There’s a lot more to it than that. And that’s going to be our next challenge.

“Can we do the same sort of stuff in Pakistan, and figure out what’s the best positive brand to play in those conditions? It’s always going to be positive, it will probably just look slightly different depending on the game, as it did this week compared to last week.