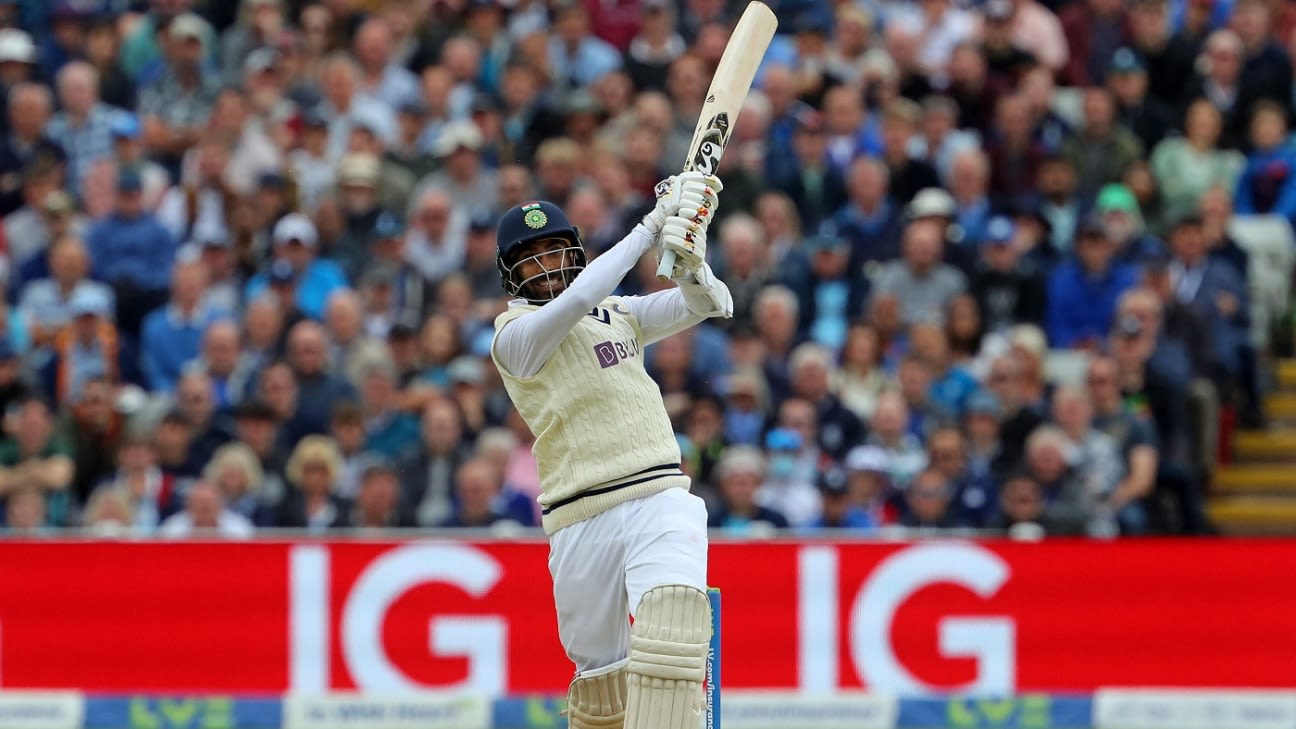 As the morning unfolded on Saturday, and England worked their way through India’s lower order, they may have entertained thoughts of restricting India to under 400. The second new ball was only a few overs old, and James Anderson had just dismissed the centurion Ravindra Jadeja. India were 377 for 9 when Stuart Broad began the 84th over of the innings. It turned into the over from hell. Broad doubled down on the short ball and India captain Jasprit Bumrah on the hitting. It ended what seemed like an age later with a record-breaking 35 runs taken
from it – including a no-ball and a wide for a new record in Test cricket. It was not the first time an India player had hammered Broad to break the record for most runs in an over; Yuvraj Singh had struck six consecutive sixes against Broad in the 2007 T20 World Cup, a record that still holds true.
Here is how the over from Broad to Bumrah unfolded on Saturday:

83.1: Broad to Bumrah, FOUR runs. Hooked, into the gap! Massive top edge, and I think Crawley might have just got to it… Bounced through and over the rope

83.2: Broad to Bumrah, 5 wides. Dug in short, clears Billings! Way above the batter as he began to swing for it again. Wides signalled

83.2: Broad to Bumrah, (no ball) SIX runs. Hoicked into the boundary boards, another fat top edge… and it’s a no-ball as well! Bumrah finagling vital runs here. This one went fine of third, but Leach was never getting to it

83.2: Broad to Bumrah, FOUR runs. Full toss, bludgeoned through mid-on! Must have been close to another no-ball, on height – but Aleem Dar only signals four. Smoked down the ground by India’s captain

83.3: Broad to Bumrah, FOUR runs. Thick-edged to fine leg, four more to Bumrah… and that boundary takes India galloping past 400!

83.4: Broad to Bumrah, FOUR runs. Swung off his feet through midwicket! Bumrah ends in a crumpled heap, but he’s middled it nevertheless! Four in front of deep square leg

83.5: Broad to Bumrah, SIX runs. Splatted for six more! World record for Bumrah! More short stuff and he whirls it up and away over deep backward square leg. Knee in the air, some Calypso flourish to that one

83.6: Broad to Bumrah, 1 run. Tip and run, Broad sweeps up and throws himself into the stumps with Siraj diving for his ground. Just makes it home!