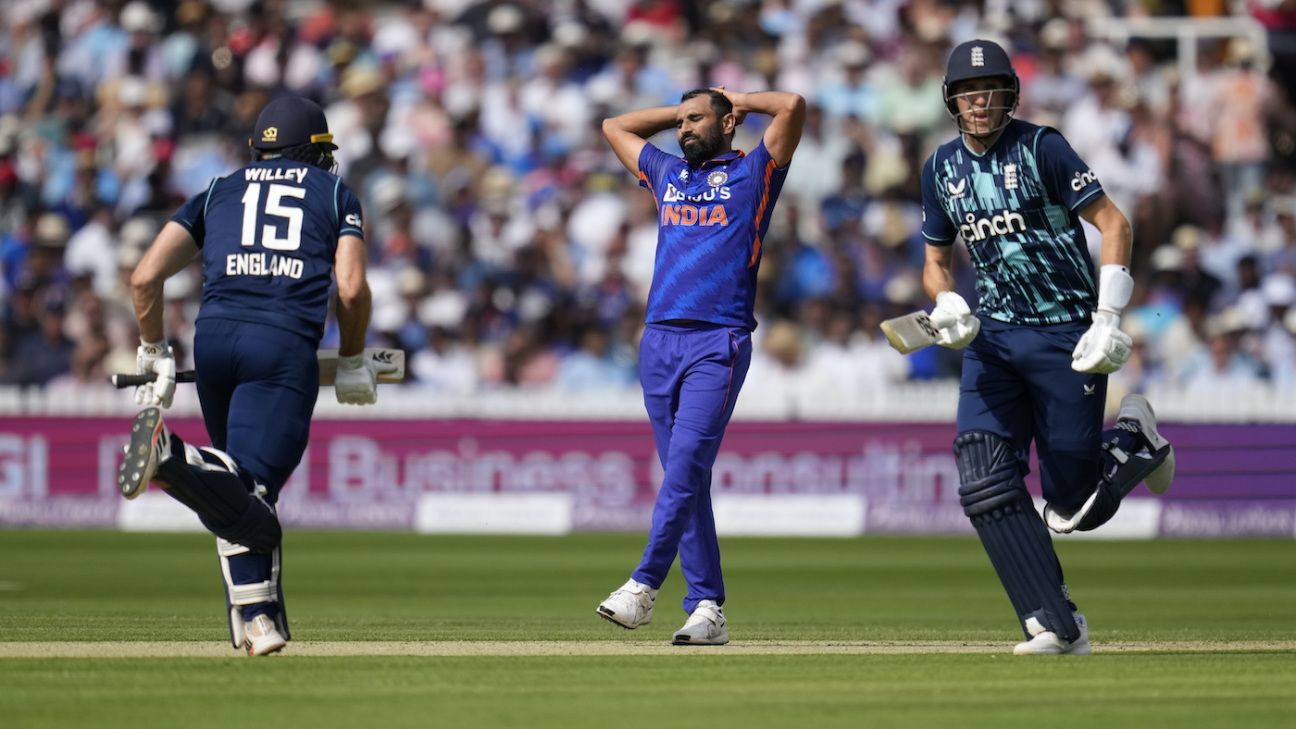 Jos Buttler admitted that England’s batting still isn’t quite firing on all cylinders, but insisted that the positivity they had shown on another complex Lord’s surface made a crucial difference in the final analysis, as they successfully defended a sub-par total of 246 thanks to a record-breaking six-for from Reece Topley.

England’s 100-run victory came just 48 hours after they had, in Buttler’s words, “come third in a two-horse race” with a ten-wicket trouncing in Tuesday’s first ODI at the Kia Oval. And given the ominous power that India’s batting had displayed during their 2-1 series win in the preceding T20Is, England seemed destined for a similar result when they slid to 148 for 6 after once again being asked to bat first.

This time, however, Moeen Ali and David Willey produced some meaningful resistance with 47 and 41 respectively to hoist the team just past the memorable total of 241 – the score with which England and New Zealand had tied the World Cup final, on this very ground three years to the day earlier.

“If you held a length, it was very tough to score. It felt like you could beat the bat and create wickets, so it was a different style of ODI cricket to that we have sometimes seen over the last few years in England, when we’ve played on excellent wickets and it’s been high-scoring.”

Only a few weeks have passed since England posted their third consecutive 50-over world record by racking up 498 for 4 against the Netherlands at Amstelveen. The challenge of facing down an attack led by Jasprit Bumrah, the No.1-ranked ODI bowler, is completely different, of course, but having called for his team to be less “timid” after the T20I loss, Buttler was pleased with their response to a calamitous display at The Oval, where Bumrah’s career-best 6 for 19 had routed them for 110.

“It wasn’t in my eyes really reckless batting [at The Oval], it was fantastic bowling that took the edges, and the catches were taken behind the wicket,” Buttler said. “Today wasn’t a completely straightforward wicket either. But that’s the challenge. We’ve all become accustomed to some very flat wickets in ODI cricket, and seeing batsmen dominate, and I think we’ve just seen two different styles of cricket due to the pitches we’ve played on.

“Today the positivity we showed with the bat is actually what enabled us to get up to the score that we did,” he added. “I think we can bat better. Absolutely we can, but instead of playing it safe and allowing the bowlers to just settle in on a length, we actually were proactive and played some positive shots, which I think earned us a few extra runs than potentially we may have got.

“That’s something we’ve tried to do as a team for a long time, play with a certain level of intensity and positivity when we bat. We could have got more, but we know that there’s a hell of a lot of experience in the batting line-up, and I have so much trust in whoever’s in the middle, to make the right call at the time, and the whole dressing room will always back those guys.

“It’s always been a real strength of the team that we have a lot of allrounders, a lot of our bowlers are very capable batsman. So that’s been a theme for the team, it allows us to be more positive because we know we bat deep into our team.

“We felt like we were a few short at the halfway stage, but very much in the game if we could take early wickets, and I thought we bowled outstandingly well, the guys set the tone at the top and we all followed.”