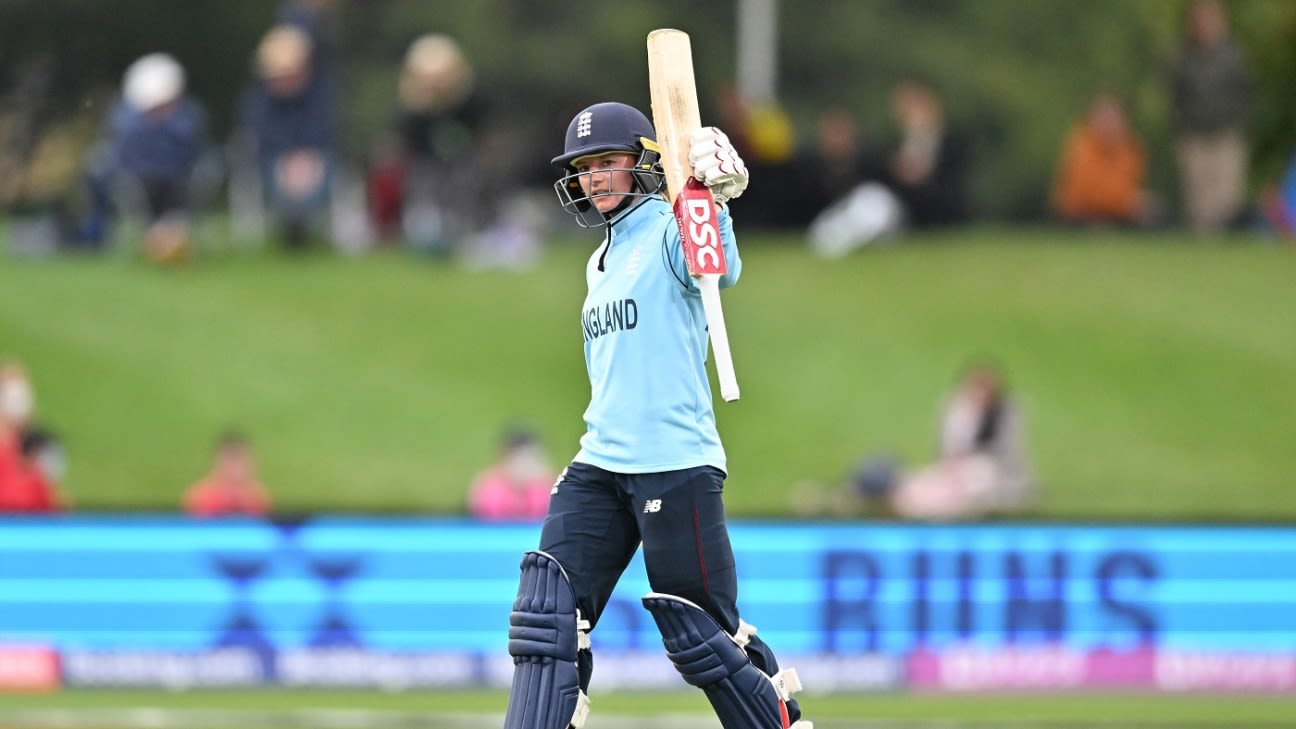 Danni Wyatt expects to slip back into England’s middle order for the first ODI against South Africa at Wantage Road on Monday, despite her starring role as an opener in the teams’ last meeting, in the World Cup semi-final at Christchurch in March.
Wyatt, 31, made the highest score of her international career – an explosive 129 from 125 balls – as England atoned for their tense three-wicket loss at Mount Maunganui in the group stages to end South Africa’s dreams of a maiden World Cup final appearance with a 137-run victory.

However, Wyatt was unable to follow up that display in the final, making 4 from five balls as Australia sealed their indomitable campaign with an emphatic 71-run win. And now, with England embarking on a new three-year white-ball cycle, the likelihood is that Emma Lamb will be given the chance to resume the opening partnership with Tammy Beaumont that was launched in the recent Test at Taunton.

“I’m happy to bat wherever,” Wyatt said. “I’ve been up and down the order, but that’s fine. I’m just happy to be in the starting eleven. A lot of coaches have said in the past that I am flexible in the order in ODI cricket, and I can perform whatever role they say, which is a credit to myself.

“It’s just about being really clear in my role, chatting to the captain or coach about what my role is going to be leading into the series and just prepare really well – whether it be with a new ball or an old ball – about my plan and how I’m going to go about it.”

Despite her starring role in the semi-final, Wyatt herself acknowledges that her best moments for England have come when her available overs have been reduced – either as an opener in T20 cricket, in which role she has scored two of England’s three fastest hundreds, from 52 balls against India in 2018 and 56 against Australia the previous year, or as an ODI finisher – she averages 40.14 at No.7, compared to 24.00 in 30 innings as an opener.

“My ideal situation is to go in with 15 or 10 overs to go,” she added. “Just go out there and do what I do in the T20 format: just be brave, show intent, run well, which is what happens when I’m playing my best cricket. Just back myself and try to get the team to the highest score possible.”

“..all the youngsters are fitting in nicely around the group. We all hang out, there’s a real good togetherness going on at the minute, so hopefully, we can take that onto the pitch as well”

Either way, Wyatt says she is excited by the current dynamic within the England squad, with a raft of new players including Issy Wong, Lauren Bell and Alice Davidson-Richards impressing when given their chances in the Test match and challenging the old guard to keep their standards high.

“We’ve got a good mix between young and old faces in the squad, which is really nice,” Wyatt said. “It keeps us all young – but it’s a bit weird saying I’m old, I don’t feel it. But all the youngsters are fitting in nicely around the group. We all hang out, there’s a real good togetherness going on at the minute, so hopefully, we can take that onto the pitch as well.”

That togetherness included an outing to Old Trafford for the opening match of the Women’s Euros last week, and with England’s cricket itinerary culminating in their Commonwealth Games campaign at the end of the month, Wyatt acknowledged this was a huge summer for women’s sport in the country.

“It’s a massive month for women’s sport,” she said. “You’ve got the Euros and you’ve us playing as well, and I was actually lucky enough to go to Old Trafford with a few of the girls the other night, which was an unreal atmosphere.

“I was in shock with how good the atmosphere was. And yeah, hopefully the girls can go all the way and win the Euros, that would be class. We’re all getting really behind the girls as well. I’m a big fan of the Lionesses. And most of our girls are as well. It’s great to watch.”

Sune Luus, South Africa’s captain, admitted that her team’s failure to seize their chance in the World Cup semi-final still hurt, and that they would be fully focussed on exacting a measure of revenge in the coming matches.

“We just had a team meeting about it, saying how much we want to get that win on the board,” Luus said. “Obviously in the semi-final, we had a lot of opportunities and just didn’t take it. I feel like that game could have gone a whole other way, and our World Cup journey could have been a bit different.

“The mindset that we’re going with tomorrow is just about taking every opportunity we have, make sure we get on top, and don’t give them that satisfaction again.”