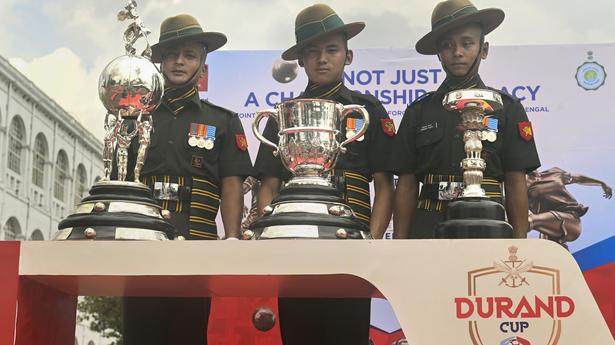 The Durand Cup football tournament will be embracing a multi-city format and a bigger selection of teams in its 131st edition, which will be kicking off here on August 16 with the most popular contest of Indian football – the Kolkata derby. The tournament, which is jointly organised by Indian Army and Government of West Bengal, started a month-long promotion campaign on Tuesday with a colourful ‘Trophy Tour’ initiative.

The three Trophies presented to the winners of the tournament – the original Durand Cup, the President’s Cup and the Shimla Trophy- will travel from Kolkata to Guwahati on July 21 before moving to the Manipur capital, Imphal on July 24. The trophies will then reach the final destination Jaipur, which is the home of the debutant Rajasthan United FC, before returning to Kolkata on Aug 2, when it will be ceremoniously received in front of the statue of the legendary footballer, Gostha Paul.

As the participation list stands now, there will be 20 teams playing this time with all the 11 teams from the Indian Super League joining the contest. There will be another five teams from I-League while the remaining four will be from the Services. The first two group leagues (groups A and B) will be played in Kolkata while Imphal will be hosting the group C matches and the group D matches will be played in Guwahati.