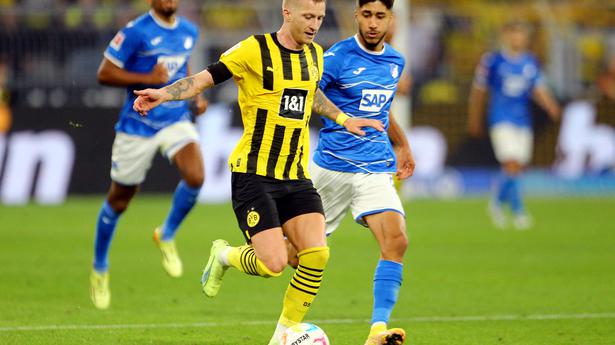 Borussia Dortmund scraped past Hoffenheim 1-0 courtesy of Marco Reus’ first-half winner on Friday to go provisionally top of the Bundesliga with their fourth win in five matches this season.

The Ruhr valley club, who host Copenhagen in their Champions League group opener on Tuesday, bagged the three points when Reus tapped in after a quick move down the left and a superb one-touch assist from Julian Brandt in the 16th minute.

Dortmund is top on 12 points, two points clear of second-placed champion Bayern Munich who visit Union Berlin, also on 10, on Saturday. Hoffenheim is fifth with nine.

Dortmund failed to add another goal in a dominant first half and had to survive a wobbly start in the second with Hoffenheim playing with more energy and committing more men forward.

“We put in a good performance especially in the first half,” Dortmund coach Edin Terzic said. “That’s how we wanted to play in the second half, to keep the opponent away, but it did not work that way unfortunately.

“Hoffenheim put us under pressure and we lost possession and then at some point we were lacking the power to stay with the ball. We need to be clearer and more efficient in our finish.”

Hoffenheim goalkeeper Oliver Baumann denied the hosts another goal in the 67th with a double save, first stopping substitute Thorgan Hazard’s effort and then blocking Anthony Modeste’s rebound shot.

There was some bad news for Dortmund with teenager Jamie Bynoe-Gittens dislocating his shoulder just before halftime.

“It was an unfortunate incident that did not seem so serious but the shoulder popped out. We hope he comes back quickly,” Terzic said.

Dortmund is already without midfielder Mo Dahoud, who will require surgery for his own shoulder injury and will be sidelined for months.