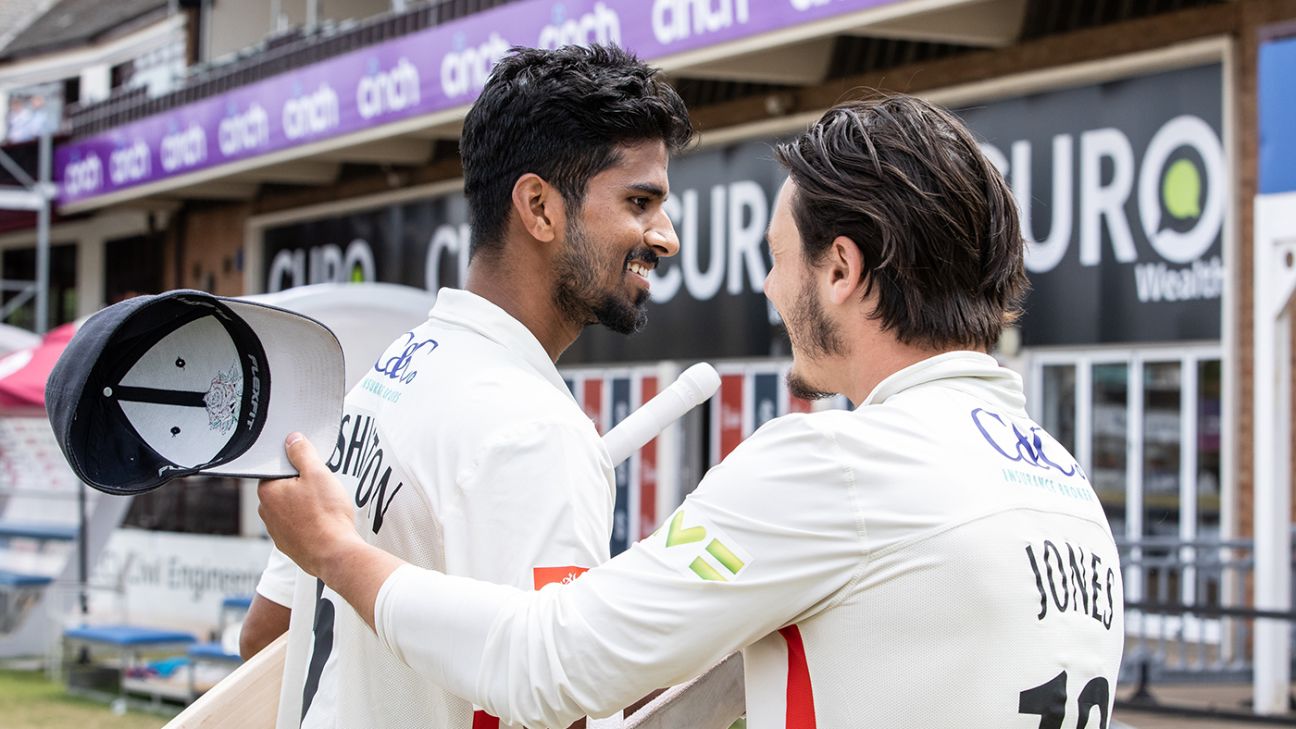 Surrey have not quite disappeared over the horizon as far as the Championship race is concerned. Lancashire are clinging on grimly thanks to a hard-earned four-wicket victory against Northants which was all the more redoubtable considering the disappointment around the club following their extraordinary last-ball defeat in the final of the Vitality Blast a few days earlier.
That they saw things through when faced with an uncomfortable chase of 278 was primarily due to four players who were not part of the Edgbaston agony – Josh Bohannon and Tom Bailey with bat and ball respectively, and Washington Sundar – on his Lancashire debut – and Will Williams, who followed up decisive bowling returns with an unlikely alliance with the bat.

Washington and Williams ground out an unbroken seventh-wicket stand of 69 in 27 overs to secure victory on the stroke of lunch. Washington, the India allrounder, has excellent batting pedigree, but Williams had only appeared at No. 7 as a second nightwatcher the previous evening and he stuck around with impressive obduracy as Lancashire, five down overnight, chipped away the last 86 runs they needed with efficiency and commonsense.

The easy way for Lancashire to have won it would have been for Bohannon, 92 not out overnight, to reach his hundred and then embark on a series of confident blows. Bohannon reached his hundred, settling in by steering the first legitimate ball of the day, from Sanderson, to the third man boundary and, on 99, clipping Jack White just wide of the diving Emilio Gay at short midwicket.

But he fell two balls later, seeking to run White behind square and picking out the diving Will Young, who pulled off a stunning one-handed catch at gully. He had not seen it through but once victory was secured, he could take pleasure not just in an overdue return to form but the knowledge that he had played the central innings in Lancashire’s victory.

At 209 for 6, still 69 short, Lancashire looked vulnerable. They responded grindingly. Williams, was a picture of self-denial. He remained strokeless, on 2 not out, for the first 50 minutes of the day. But Ben Sanderson was more wayward than is his habit and his most stray offering, an inviting half-volley down the legside, finally drew Williams into a glanced boundary.

Will Young, the New Zealand batter, has taken over the Championship captaincy in extremis after the resignation of Ricardo Vasconcelos after barely four months in charge. Vasconcelos himself was an emergency appointment after Adam Rossington left the club in peak season in an argument about his fitness levels.

Young put his faith in seam, even though the ball was turning. Lancashire’s target had been trimmed to 53 before Simon Kerrigan’s left-arm spin was introduced, but he rarely looked dangerous, even if he did tempt Williams into a couple of failed square cuts. Rob Keogh soon joined him, but when the offspinner’s first ball turned so sharply that it was given as a wide, he was so mystified that he never looked as dangerous again.

Northants took the new ball with 25 needed, but it only quickened Lancashire’s path to victory. Washington twice cut boundaries off Sanderson, so often Northants’ inspiration, but not today. All that was left was for Williams to middle a cut shot against Kerrigan, who had been given the new ball in a final gambit, and he did just that to cries of satisfaction from the Lancashire dressing-room balcony.

New Zealand’s loss will be Lancashire’s gain. Williams’ last decade has been spent in New Zealand with Canterbury, but he has a British passport and even though he initially joined Lancashire last month on a short-term overseas deal, he has since gone local. On this evidence, he is already ingrained into the squad.

There again, you could observe the same about Washington. Short-term overseas signings are a necessary gamble for the counties these days, but they can be problematic. Some players come and go without quite remembering the names of half their teammates, or even caring, but Washington’s input with both bat and ball was a key factor in a victory that keeps Lancashire 31 points behind Surrey with four games remaining.

They meet in the final match at Old Trafford in late September and Lancashire’s target is to get close enough to give the match relevance. They say the weather is always beautiful in Manchester at that time of year…