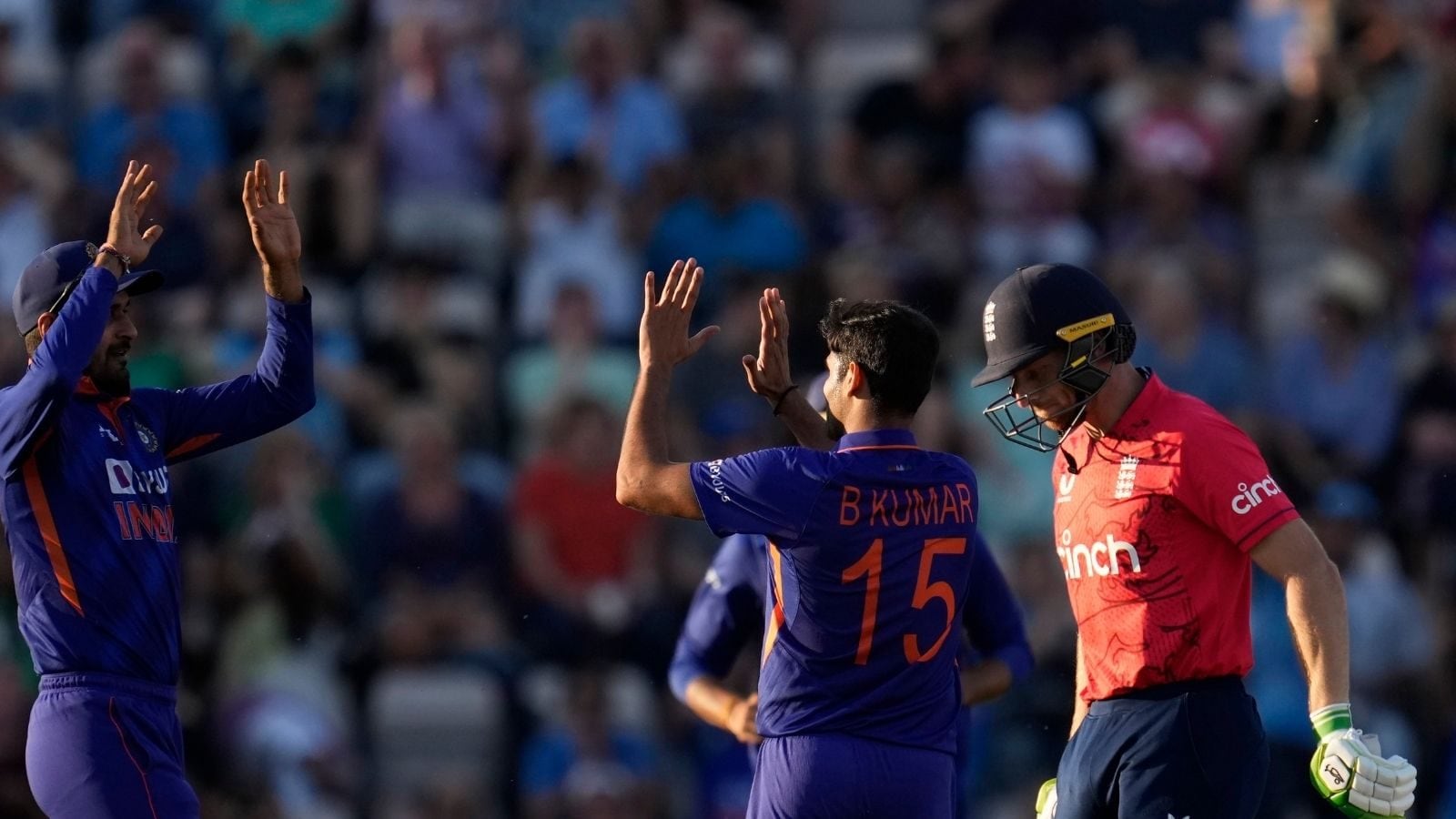 Ace India pacer Bhuvneshwar Kumar is having a great with the bowl in foreign conditions lately. He bowled brilliantly in the Ireland series last month and now, he is breathing fire against Jos Buttler’s England. Known as one of the specialist swing bowlers, the right-arm quick has been making the new ball talk in the ongoing T20Is.

In two matches so far, Bhuvneshwar has scalped 4 wickets at an average of 6.25. More importantly, he dismissed England’s newly-appointed white-ball captain Buttler in both games. The Englishman was in red-hot form in the IPL 2022, ending the season as the highest scorer, with 863 runs to his credit. However, he’s yet to replicate that performance in the ongoing series. In two innings, Buttler has scored 0 and 4, respectively.

On Saturday, Bhuvneshwar bagged the Player of the Match award for his extraordinary job with the ball. Defending a 171-run target, he removed opener Jason Roy off the very first ball of the English innings and then got the home skipper caught behind. He returned with the figures of 3/15 in 3 overs.

Speaking about his game plan with Yuzvendra Chahal on ‘Chahal TV’, the Indian pacer said he always got for wickets as getting early success in powerplay helps the team, especially when it’s defending a total.

“Generally, I assess the wicket after bowling out the first ball. But we saw that the ball was swinging in both games. So, I always go for wickets. Because when you are defending a total and get early wickets in Powerplay, then the job gets easy. And when you (pointing at Chahal) come into the attack later, you get hit for more sixes. So, when it’s swinging, I try to pick as many wickets as possible,” Bhuvneshwar told Chahal.

Buttler nicked a delivery from Bhuvneshwar to Pant. The umpire gave it a not-out initially, but India took a review, and ultimately, the decision turned out in their favour.

Speaking about the dismissal, he said, “I was a bit surprised when the ball went past his bat. Before bowling, I didn’t expect that much bounce. Yeah, the swing was definitely there. Everyone heard that nick except Rishabh Pant. Since you were about to bowl in the next spell. So, Rohit went for the DRS because he knew you will get hit.”

Saturday’s win handed India a 2-0 lead in the 3-match series. On Sunday, the visitors will look to affect a whitewash when they lock horns with the hosts in the final fixture in Northampton.

“Definitely, a good series win. We knew England are one of the top sides in the world. So, prior to the World Cup, defeating them in their home gives us confidence. It also instills the faith in us that the skills that helped us here can also benefit in Australia too,” Bhuvneshwar concluded.