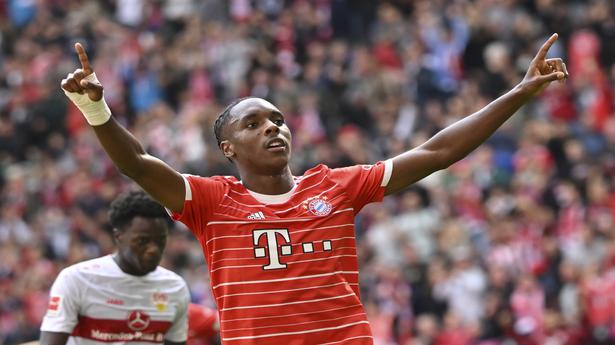 Bayern Munich conceded a stoppage-time equaliser through VfB Stuttgart striker Serhou Guirassy from the penalty spot for a 2-2 on Saturday, the champion’s third consecutive Bundesliga draw.

It started well for Bayern, which faces Barcelona in the Champions League group stage next week, with forward Mathys Tel scoring the opener in the 36th minute.

France youth international Tel, who at the age of 17 years and 136 days became the youngest player to start a league game for Bayern, had already scored in the German Cup first round.

He made sure of his first league goal by drilling in a low drive from an Alphonso Davies cutback.

Bayern coach Julian Nagelsmann rotated heavily from the side’s 2-0 midweek Champions League win at Inter, and his team dropped its pace in the second half, giving Stuttgart more room to push forward.

It was rewarded when Chris Fuehrich netted the equaliser from close range in the 57th but three minutes later Bayern was back in front with another teenager.

Jamal Musiala, the 19-year-old former youngest league scorer for Bayern, shook off his marker with a quick change of direction and floated a superb ball into the back of the net.

The visitors’ biggest chance to level came in the 74th when Guirassy’s shot from 18 metres bounced off the crossbar with keeper Manuel Neuer beaten.

But it earned a stoppage time penalty following a foul by Matthijs de Ligt on Guirassy.

The Guinea international kept his composure to beat Neuer and earn a point for the visitors.

Bayern goes top of the table on goal difference with 12 points, ahead of the weekend’s other fixtures.