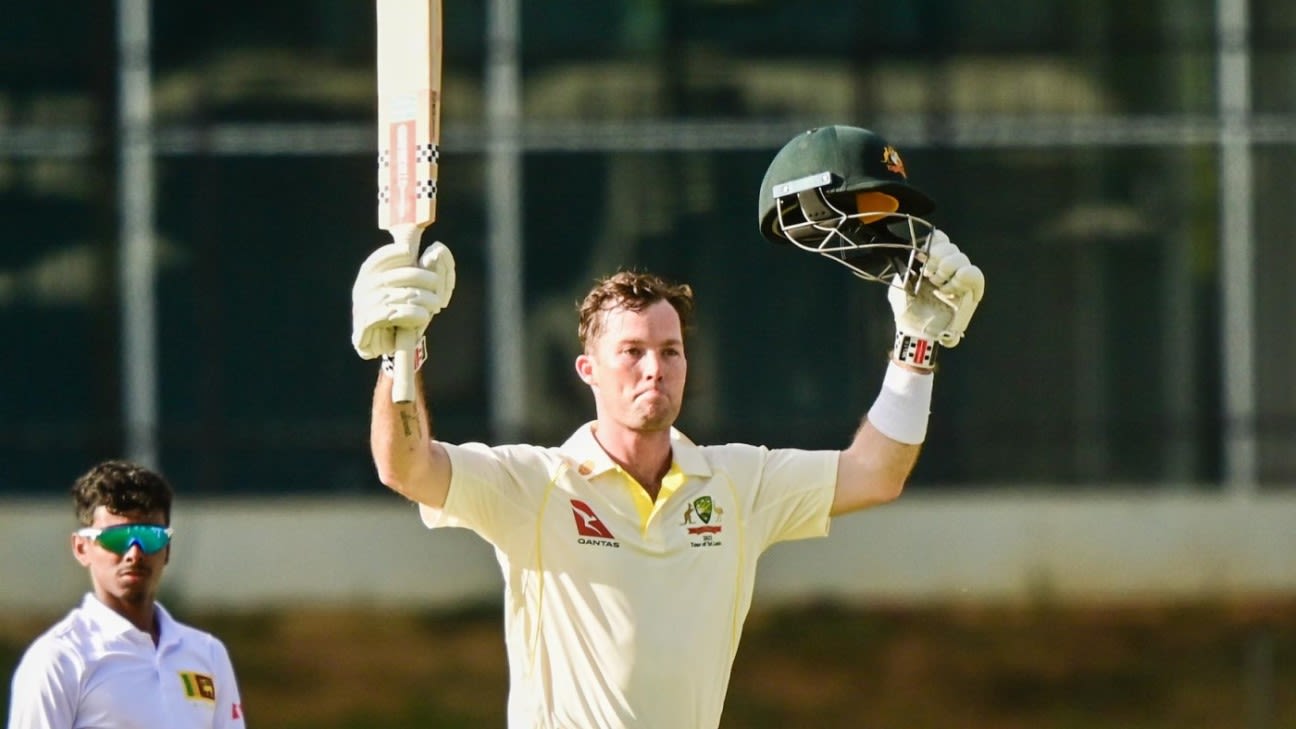 Which Australian batter had the best tour of Sri Lanka? Marnus Labuschagne and Steven Smith both made excellent centuries. Cameron Green played a match-winning hand in the first Test. Glenn Maxwell had his moments in the white-ball matches.

However, none of them made 208 runs in three innings without being dismissed. That honour goes to Jimmy Peirson, the Queensland wicketkeeper-batter, who was a late addition to the Australia A squad and produced a magnificent performance in the second four-day game against Sri Lanka A where he made unbeaten scores of 67 and 128 – the latter as the visitors successfully chased 367 for victory.

Add in a little unbeaten 13 not out during the first four-day match when he was subbed in after Travis Head was called into an injury-hit ODI squad and Peirson had the ultimate red-inker.

Peirson knew he was a reserve for the A-tour so had been training in Brisbane alongside the rest of the squad before they departed and some of the senior group who used the year-round facilities to get up to speed. He also had to renew his passport which, as many people are finding out now that travel is reopening, can easily be overlooked.

“It was a good job I got that done because it all happened pretty fast in the end,” Peirson told ESPNcricinfo. “My mindset going into the tour was, I’m not even meant to be here so, I didn’t even expect to play, thought I’d be running drinks, so to get one-and-a-half games I was just over the moon. Just so pleased to have an impact.

“I wouldn’t say it exceeded my expectations, but I certainly didn’t go out thinking I’d score [those] runs and not be dismissed. But I knew in the conditions we had there was no reason if I applied myself and did the basics for a long period I couldn’t score runs.”

Ahead of the tour, Peirson had trained extensively alongside Nathan Lyon before he flew out for the Tests and had also leant on the experience of Queensland team-mates Usman Khawaja and Joe Burns. He worked on improving his sweeping, including adding a reverse, but in the end, more traditional skills worked well on the tour where the pitches for the A-series were much flatter than those produced for the Tests.

“Conversations I had with the guys who had been there were probably the most beneficial rather than the actual skill component itself,” he said. “In terms of how I’d play spin, I spoke to Gaz [Lyon] and Uzzie about some technical tweaks and they spoke about how you defend the ball over there when it’s spinning.

“Joe Burns said go there expecting the wickets to be flat for the A series because often that’s the way they do things. So don’t go across with preconceived ideas, and I was so glad we had that chat because I was like, okay, it’s going to be good batting conditions and if it spins I’ve done the work. If it’s flat, fill your boots.”

It was Peirson’s first trip to Sri Lanka and his first time in the subcontinent since a Queensland Cricket sponsored trip in 2016. He had also previously been on an Under-19 tour in 2011-12 but admitted he was now a very different cricketer to those days.

“Felt my game is entirely different now to when I was over there as a youngster,” he said “I was very immature and didn’t really think about the game a whole lot. Going across now is massively important to my game in terms of the learning side and loved every minute.”

“If I don’t play Test cricket that would be a frustration, but all I can do is when I’m done, sit in my armchair and know that I did everything I could. If that opportunity doesn’t come, that’s the way it is. The game has been very good to me.”

Of the second match itself, where Australia A ended up knocking off their hefty target with relative ease, Peirson said that conditions had remained good for batting for right-handers throughout, but the challenge was greater for the left-handers. That is borne out by the scorecard where he, Henry Hunt and Aaron Hardie did the bulk of the scoring while Marcus Harris and Matt Renshaw fell cheaply to offspinner Lakshitha Manasinghe who was later added to Sri Lanka’s Test squad.

“The whole time we were speaking about winning the game, how we’d do that, so to contribute was a lovely reward for confidence in my own game,” he said. “It’s an A series, but to do it at that level, if a chance was to come at Test level, it’s another thing ticked off. I feel as though I have a game that can adapt and be successful in various conditions. It was such a great experience.”

So what of the chance to play Test cricket? It’s a fight for a lone position. Alex Carey, despite a difficult second Test in Galle, came out of the Pakistan and Sri Lanka tours in credit and seemingly has the spot locked down for foreseeable future. Josh Inglis has been the back-up gloveman across all formats over the last few months, but Peirson has put together two impressive seasons on both sides of the stumps for Queensland.

He has an eye on more opportunities for Australia A with that programme set to expand after being largely dormant during the pandemic and the lure of next year’s Ashes tour to England is strong.

“It’s the age-old thing, especially in places like Australia and England, you’ve always got all these keepers,” he said. “Think it’s a good problem to have, all scoring runs and keeping well, and all you can do is if you get opportunities take them. Prepare the best I can do.

“Obviously there’s an away Ashes next summer. I’d love to get over and play some sort of cricket in England. I’ve played premier league cricket quite a few years ago now but would love to experience those conditions again and develop my game.

“If I don’t play Test cricket that would be a frustration, but all I can do is when I’m done, sit in my armchair and know that I did everything I could. If that opportunity doesn’t come, that’s the way it is. The game has been very good to me.

“It’s not to say I don’t want to do it, [it] drives me every day to play Test cricket. But if circumstances don’t see that happen, that’s the way it goes. You can’t control those things. I’m just loving my cricket, in a really nice place with my game, my family life, so just appreciating every opportunity I get.”

Andrew McGlashan is a deputy editor at ESPNcricinfo