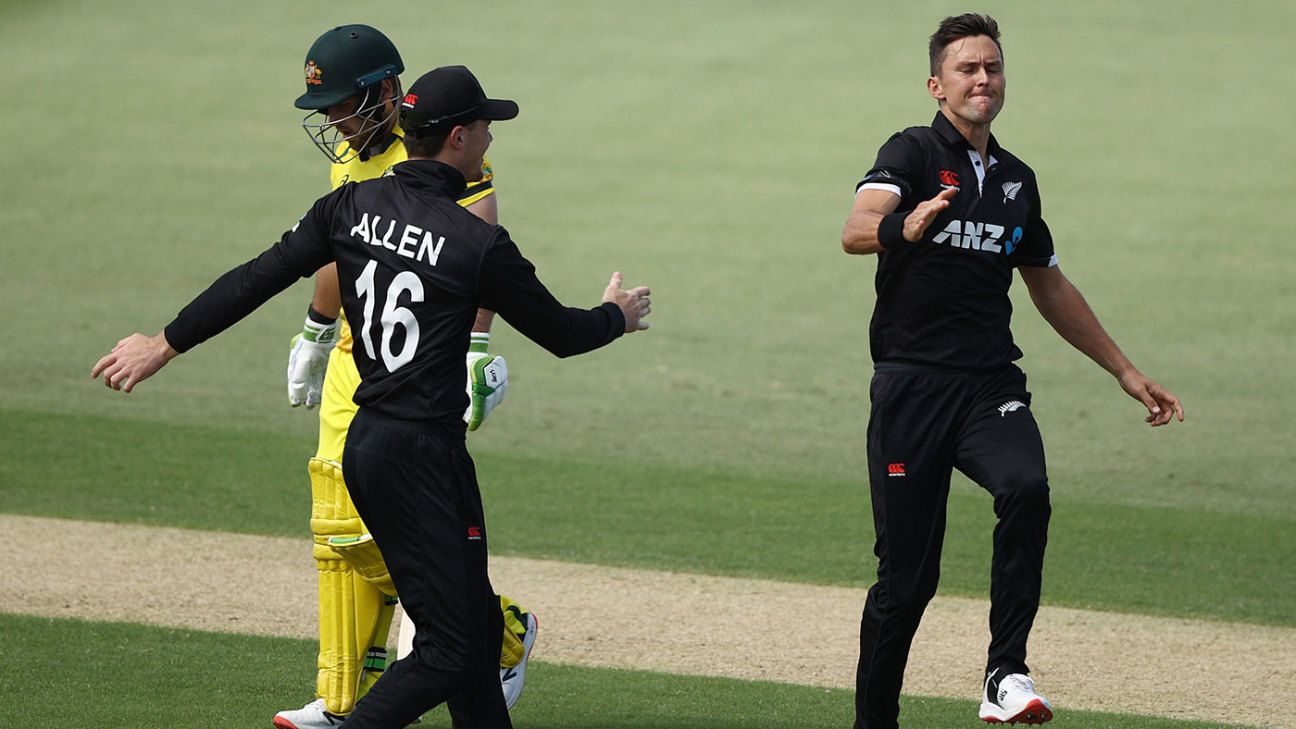 New Zealand are “disappointed and frustrated” after being swept 3-0 by Australia in the ODI series in Cairns, especially after “having opportunities in all three matches and not getting over the line,” according to their coach Gary Stead. New Zealand had the hosts under pressure with early wickets in all three games but lost two of those by slim margins: the first by two wickets and the third by 25 runs.

New Zealand began their 268 chase with an opening stand of 49 in nine overs in the third ODI on Sunday. They were well placed at 106 for 3 in the 25th over before Kane Williamson was run out and James Neesham and Glenn Phillips holed out against the Australian quicks to slip to 224 for 7 and eventually fall short.

“I can assure you it was a pretty frustrated dressing room last night,” Stead said on a Zoom press conference on Monday. “The guys are disappointed and frustrated after having opportunities in all three matches and not getting over the line. I think it’s easy when you lose that you can go soul searching a little bit, but we try not to do that. We try to be clear in our processes and what we’re trying to do and try to get better each day. Unfortunately Australia put enough pressure on us and we couldn’t quite get over the line last night again.”

Stead conceded that they were on the receiving end of Australia’s counter-attacking strategy through the series. While defending 232 in the series opener, a fiery first spell from Trent Boult reduced the hosts to 44 for 5 before Alex Carey and Cameron Green helped them seal a thrilling victory. Batting first in the second ODI, Australia were 54 for 5 but Steven Smith and the tail managed to put on 195 which they defended by bowling out New Zealand for just 82. In the third game, on a pitch much better for scoring, Smith’s century led Australia to the highest score of the series and New Zealand’s middle order fought back but couldn’t take them over the line.
When asked if New Zealand had a mental block of never winning a series in Australia in the past, Stead said: “I don’t know, a lot of teams come to Australia and they struggle to beat them, and we’re no different. They’re a very, very good side, they compete the whole time, it’s something we talk about within the group, how we keep throwing punches back at them and they seem to keep having answers for them at the moment. But we’re also a good side and we’ve to learn how we can compete and put that killer punch in at times as well to make sure we can get on top of them.”
Boult was New Zealand’s standout performer in the series with his new-ball exploits that fetched him 10 wickets overall with an economy rate of just 3.43 – his most frugal ODI series – and eight maidens, the second-most he has bowled in a bilateral series. But having given away his New Zealand contract recently, it is clear that he won’t be available for them as often in the future.

“Trent’s made his decision around that and we respect that as well,” Stead said. “He’s been a fine bowler and still is a fine bowler for New Zealand and that showed through this series as well. If Trent is there then we look like a stronger team, but we have to make some decisions around what that looks like for us going forward as well because we do have to keep developing our depth underneath as well.”

The pitches at the Cazaly’s Stadium in the series were fairly slow which made batters struggle for quick runs, especially in the first 30 overs of the innings. It was only in the final game that Smith scored the only century of the series – the slowest of his ODI career, the middle and lower order scored quick runs in the end, and New Zealand got off to a quick start with Finn Allen, who came in for Martin Guptill, scoring 35 off 38.

Stead praised Allen’s innings but said New Zealand’s bowling needed some work in the end overs and that these pitches were good preparation for them looking ahead to the ODI World Cup next year in India.

“I thought last night the pitch was slightly better than the first two that we played on,” Stead said. “We started very very well with the ball, I thought the opening bowling was very good; we’ve done that well all series. I guess the areas that we can keep looking at to improve will be more of the latter end of the bowling innings and we also improved the top of the [batting] innings as well. Devon [Conway] and Finn got away to a nice start and they applied pressure back on Australia but we kept losing wickets and when it felt like we were getting on top, those wickets kept hurting us and put us in a position that ultimately made it too tough.

“I thought Finn looked really good. He was disappointed again, he’d gotten a start, the opening partnership was important for us, given right throughout the whole six innings – generally the five before that – the teams really struggled to get away. But I thought he looked composed out there, he didn’t overawed at all, I guess that is perhaps one of the advantages of going to the IPL for a couple of years as you get to learn and live alongside some of these players as well. Certainly didn’t look out of place.

“First thing to note is the pitches we played on weren’t typical Australian pitches either, they were definitely on the slower side. Playing on these pitches was good exposure for us because you go to a World Cup in India, you play on some very different wickets. Having the experience and needing to adapt are things that are important. There’s certainly no excuses around the pitch at all, we have to adapt to what’s in front of us.”