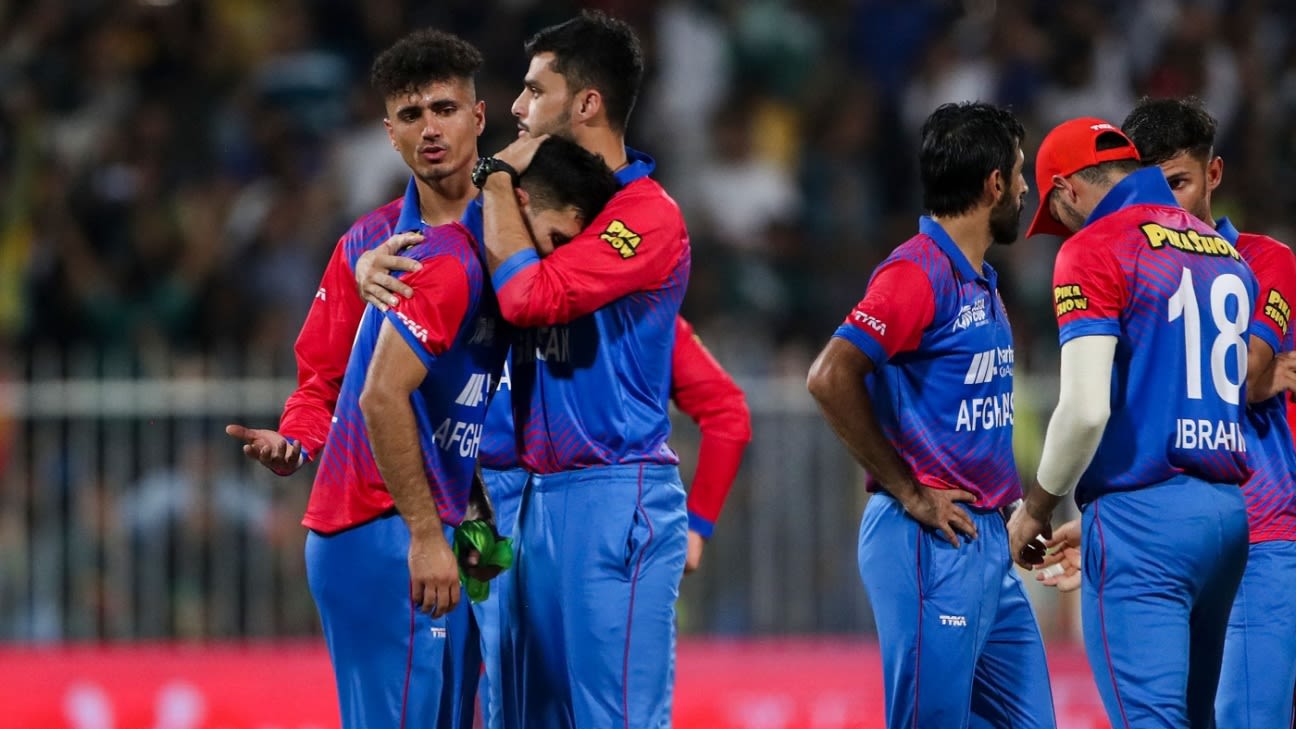 Raees Ahmadzai, Afghanistan’s assistant coach, has implored the ICC and other Full Members to play them often to help develop quality, improved game sense and the ability to close out matches under pressure.
Since 2021, Afghanistan have only played Ireland, Netherlands, Bangladesh and Zimbabwe in bilateral series. Their maiden tour to Australia, which was first postponed because of Covid-19 in 2020, was called off late last year.
Their last opportunities against other Full Members prior to the Asia Cup were at the 2019 World Cup in England, where they came within touching distance of beating India and were well in control before slipping under pressure against Sri Lanka and Pakistan.
Ahmadzai was speaking after Afghanistan’s 101-run loss in their final Super 4s Asia Cup fixture against India. After running Sri Lanka and Pakistan agonisingly close in their first two games, they spectacularly unravelled on Thursday night.
Afghanistan reprieved Virat Kohli early and then saw him blast his maiden T20I century which also helped break his long drought without an international hundred. India posted 212 for 2, and it was game over for Afghanistan six overs into their chase when they slipped to 20 for 5.

“It’s important for a team like us to play against top-level teams,” Ahmadzai said. “It’s not easy. I can’t remember when we last played India or Pakistan. Playing one or two matches against them in top-level tournaments is not enough. It will help if we play them more often.

“Only then can our players learn to control their emotions, control pressure and learn from [the experience]. I feel we deserve that. The way we started in the Asia Cup, giving a tough time to the other teams, I think we did well. Our win over Sri Lanka was a one-sided win, we beat Bangladesh. But we have to improve on the basics. Our players realise where we should be more focused so that we can finish the way we started.”

“If you’re playing against the big names, the big stars, you always get to learn a lot. During the tournament we spent some time with the Pakistani and Sri Lankan players also. It was a good experience, something our players can learn [from] and apply at the World Cup.”

Afghanistan had a tough draw, having to turn up for the India clash within a day of playing Pakistan in an emotionally and physically sapping contest they lost in the final over. Ahmadzai revealed the team had been “sleepless” following the Pakistan loss, because of how much it took out of them mentally, having lost a game they believed was theirs.
Defending 130 on a ground with small dimensions, Pakistan had been reduced to 118 for 9 with seven balls left. Then Naseem Shah walloped two sixes off full tosses against fast bowler Fazalhaq Farooqi as Pakistan won in dramatic fashion.

“To be honest, everyone panicked in that situation [when Pakistan were nine down],” Ahmadzai revealed. But then we played back-to-back games, and we tried our best. The way we looked at the wicket, I thought we could restrict India to 170 or 180. But if you drop a catch of a good player like Kohli, he won’t give you too many opportunities.”

Afghanistan can look back on some fine individual performances. They proved there was more to their attack than just their spin superstars Rashid Khan and Mujeeb Ur Rahman. Their young fast bowling unit, led by Farooqi, Naveen-ul-Haq and Fareed Ahmed showed there was potential to work with.
In the batting department, Najibullah Zadran smashed an unbeaten 17-ball 43 to help beat Bangladesh, while Rahmanullah Gurbaz impressed when he top scored with 84 in their first Super 4s fixture against Sri Lanka. Ibrahim Zadran made scores of 42*, 40, 35 and 64*, showing the kind of consistency their batting often lacked in recent times.

For Ahmadzai, these were areas of encouragement as they build towards the T20 World Cup in Australia. “I think we did very well, especially our young boys,” he said. “We learnt a lot from our first two wins. Then the way we defended 130 against Pakistan was a good learning process for our players ahead of the World Cup.

“If you’re playing against the big names, the big stars, you always get to learn a lot. We saw how Kohli or KL Rahul batted. During the tournament we spent some time with the Pakistani and Sri Lankan players also. It was a good experience, something our players can learn [from] and apply at the World Cup.

“Overall, the biggest positive was the way we started this tournament with two wins. The way we beat Bangladesh, the way we gave a tough time to Pakistan. I’m happy to see our youngsters going a great job. These are things we will carry forward.”