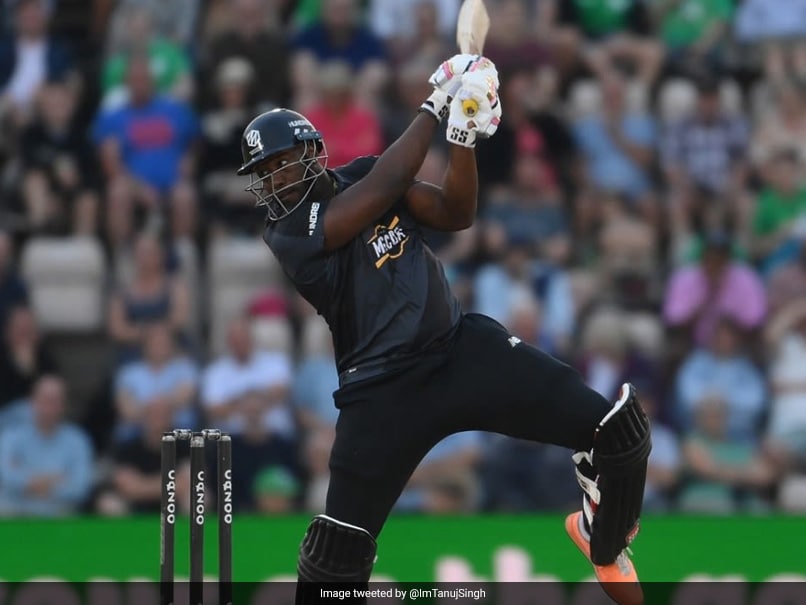 Andre Russell was at his best in the Hundred© Twitter

Manchester Originals outplayed Southern Brave by 68 runs in a match at The Rose Bowl, Southampton in the ongoing The Hundred tournament on Thursday. While the side posted a total of 188 for 3 in the stipulated quota of 100 balls, it bundled out the opponent for 120 runs in 84 balls. It was an all-round show from Andre Russell that helped Manchester Originals dictate terms in the game. Russell scored an unbeaten 64 off 23 balls and later picked one wicket to not only take his side home but also bag the Player of the Match prize for himself.

Manchester Originals were 99 for 2 for 64 balls when Russell came out to bat. Out of the 36 balls left, Russell played 23 and smashed six fours and five sixes. The right-handed batter raced to his fifty off 20 balls with a boundary towards backward square leg and scored 14 off the next three balls.

No margin for error with @Russell12A at the striker’s end, and #MichaelHogan made plenty. Is there any better finisher in the game?

Watch all the action from The Hundred LIVE, only on #FanCode https://t.co/3GLSe3jcqw@thehundred
#TheHundred #TheHundredonFanCode pic.twitter.com/vg2GBLJlio

Besides the innings of Russell, Jos Buttler‘s knock of 68 off 42 balls also played a crucial role in taking Manchester Originals to a big total. Meanwhile, Philip Salt also scored 38 off 22 balls to help the team’s cause.

Salt stitched 64 runs with Buttler for the opening wicket before being dismissed by Jake Lintott. New batter Wayne Madsen was run out for 9 but his wicket invited Russell to the crease and what followed was a barrage of boundaries.

In reply, James Vince and Quinton de Kock provided a good start to Southern Brave but the side failed to capitalize on it. Their specialist batters failed to take their innings deep and the result saw the side being bundled out for 120 runs. Paul Walter was the pick of the bowlers for Manchester Originals with figures of 3 for 20, while Matthew Parkinson and Tristan Stubbs claimed two wickets apiece.