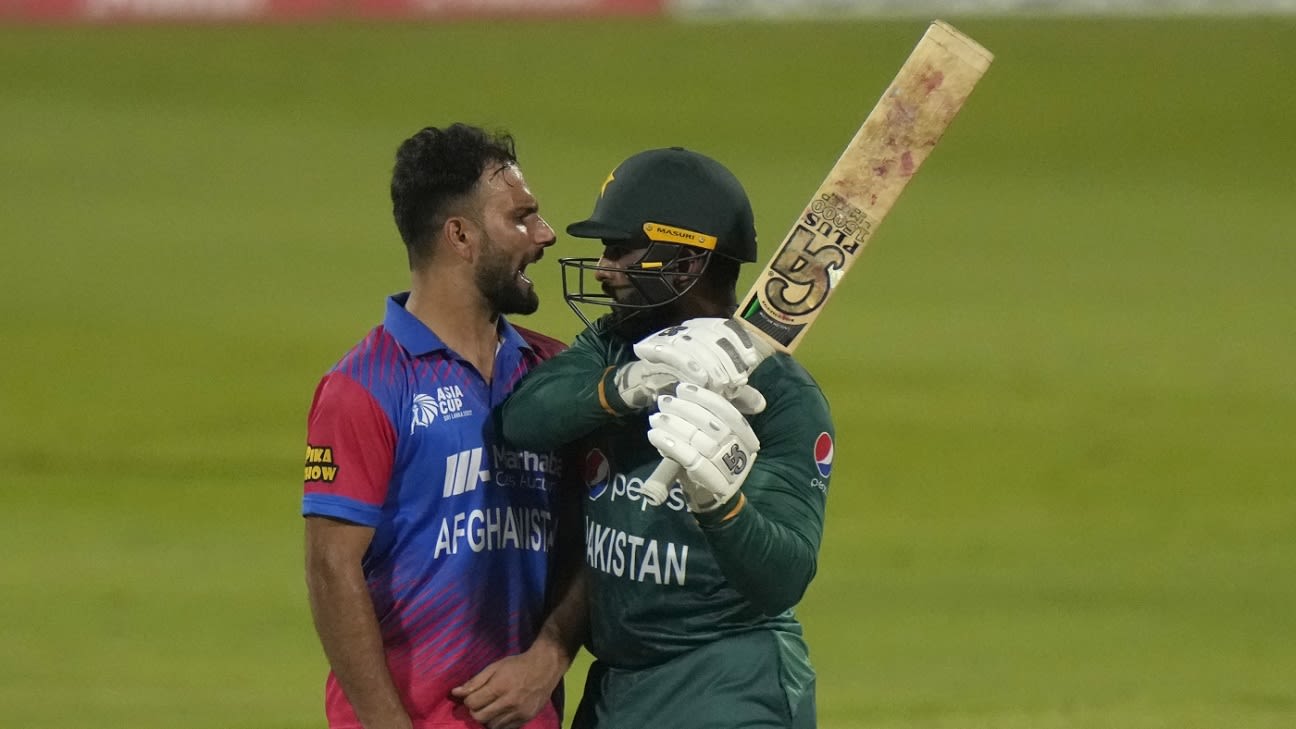 A spectacular game between Afghanistan and Pakistan at the Asia Cup Super 4 game in Sharjah on Wednesday was marred by crowd trouble in the stands. Several Afghanistan fans were detained by the Sharjah police following the incident. However, no arrests were made.
Tempers flared as soon as Pakistan brought up victory in dramatic fashion courtesy Naseem Shah‘s twin sixes in the final over. In the aftermath, fans, believed to be Afghanistan supporters, began throwing punches at people wearing Pakistan jerseys.
ESPNcricinfo understands the trigger for the incident was Asif Ali‘s run-in with Afghanistan fast bowler Fareed Ahmad after he had been dismissed. A visibly charged-up Fareed threw celebratory punches right in Asif’s face, who responded by pushing Fareed back and raising his bat at his face. Both players exchanged heated words with each other before Afghanistan’s Azmatullah Umarzai and Pakistan’s Hasan Ali stepped in to calm things down.

Footage captured in the stands also showed fans pulling out bucket seats and flinging them at each other. Cushioned seats were also torn up. Considerable damage had been done by the time the ground authorities and the police swung into action. The organisers quickly ushered the public out of the stadium to prevent any further damage.

On social media, former Afghanistan Cricket Board CEO Shafiq Stanikzai called for a ban on Asif for his aggression. “This is stupidity at extreme level by Asif Ali and should be banned from the rest of the tournament, any bowler has the right to celebrate but being physical is not acceptable at all,” Stanikzai tweeted.

This elicited a response from former Pakistan fast bowler Shoaib Akhtar. “Afghan players put right back into their place by 19-year-old kid Naseem Shah. Unforgettable match against people we have loved & supported always. Lekin bat tamizi aur arrogance nay un no foran neecha dikhaya,” (But bad behaviour and arrogance showed them in poor light).
Flashpoints between Afghanistan and Pakistan fans are not an uncommon occurrence. At last year’s T20 World Cup, thousands of ticketless fans from both teams tried to force entry into the stadium in Dubai. When this was met with resistance by the local ground authorities and private security agencies, heated exchanges between both sets of fans led to the external barriers being pushed over.
Prior to that, at the 2019 ODI World Cup, security personnel appeared to underestimate the feeling between the fans of the two countries, who began fighting in the stands, hurling rubbish on the field and invading the pitch even as the players scrambled to reach their respective dressing rooms.
The increased number of incidents between Pakistan and Afghanistan fans is somewhat linked to the geopolitical tension existing between the two countries since 2017. The players themselves have largely been quite cordial with each other. Afghanistan’s have taken an active part in the Pakistan Super League and Pakistan greats like Inzamam-ul-Haq and Rashid Latif have been part of Afghanistan’s coaching staff. Umar Gul is their current bowling coach.