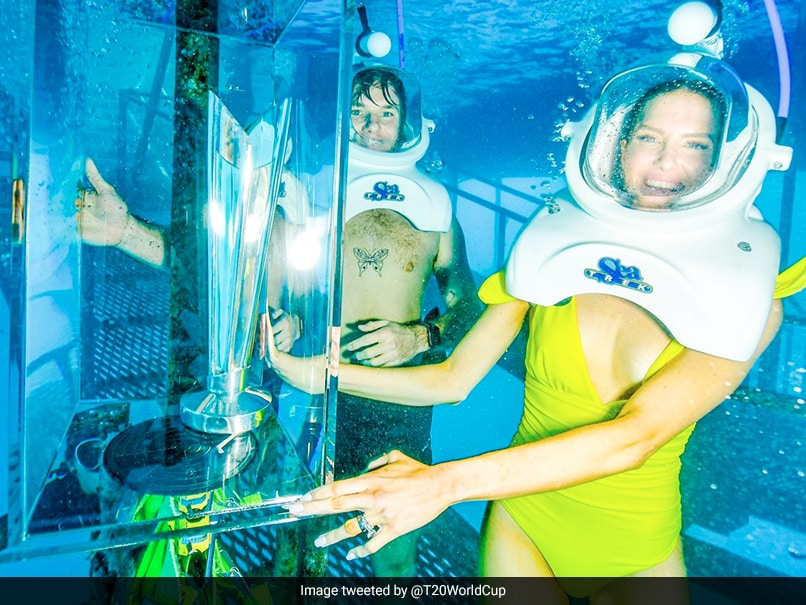 Adam Zampa and Erin Holland with the trophy.© Twitter

The T20 World Cup trophy is going places. The 2022 edition of the marquee event will take place in Australia in October-November and currently the trophy is on a Tour.  The ICC Men’s T20 World Cup 2022 trophy has reached one of Australia’s most iconic natural wonders, with Australia leg-spinner Adam Zampa, sports presenter Erin Holland and Australian paralympic swimmer Grant Patterson taking the prized silverware to the clear waters of the Great Barrier Reef. Secured in a custom-made case, the trophy was ferried across by Zampa and local cricket fans to Reef Magic Pontoon, off Cairns, which gives visitors the opportunity to get an underwater seat to see the colours and sea life of the reef.

The visit is part of the ICC Men’s T20 World Cup Trophy Tour which will touch down in 21 locations across all eight Australian States and Territories in addition to 12 other countries.

Took the @T20WorldCup trophy for swim with a couple of legends on the #GreatBarrierReef yesterday! The #T20WorldCup is just around the corner.. who’ve you got to take this beauty home..? @CricketAus #cricket #worldcup #notabaddayintheoffice #adamzampa #grantscooterpatterson pic.twitter.com/gyk2m7frzF

“Days like today are a reminder of how lucky we are to live in a country with so much natural beauty. It’s a privilege to be able to bring the World Cup trophy to this precious place and encourage fans around the world to get to Australia later this year,” ICC quoted Adam Zampa as saying.

“The cricket is going to be amazing with all the best teams in the world here, but as fans will see as part of the Trophy Tour, there’s so much else to see and do while they’re here,” he added.

With help from a few familiar faces, the ICC Men’s #T20WorldCup Trophy undertook an underwater adventure at the Great Barrier Reef. pic.twitter.com/yLxazYZi30

The T20 World Cup will feature 16 international teams, bringing fans together from around the world for the global showpiece event and giving them the opportunity to experience the best of Australia while they are here for the cricket.

Over 100,000 international visitors are anticipated to attend the event, which is being played from October 16 to November 13 across seven host cities.