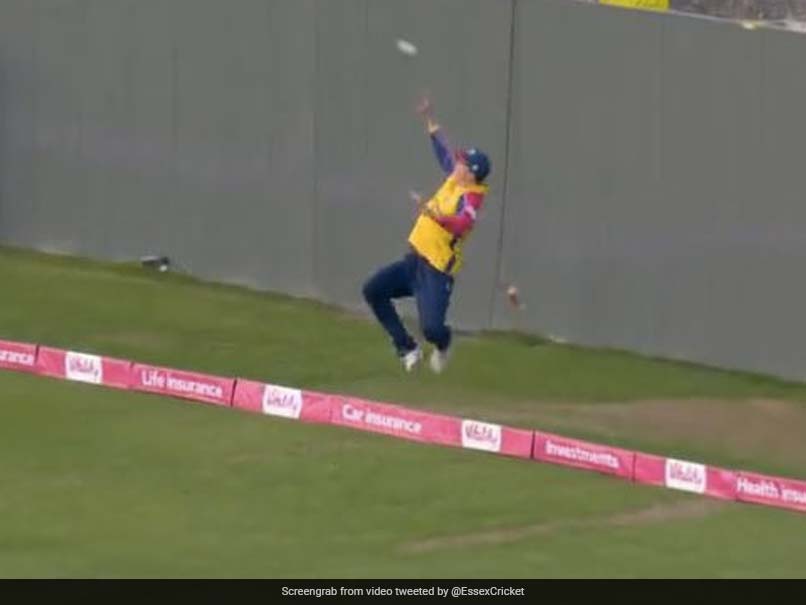 Stunning catch was taken in T20 Blast by Pepper© Twitter

Cricket has often stood witness to terrific catches. One such catch happened during the third quarter-final of the T20 Blast between Essex and Lancashire in Manchester on Friday. And, it had a funny point of reference as well. Batting first, Essex scored 161/5 in 20 overs. Their No. 3 Michael Pepper top-scored for them with a 28-ball 36. He was stumped by Phil Salt off Tom Hartley in the 13th over. Then, Pepper had his revenge too.

In the chase, Salt came in to bat as opener for Lancashire. He was batting on 27 when he looked to hit one over deep mid-wicket, where Pepper was stationed, off Matt Critchley’s bowling. Pepper leaped to hold on to the ball, but he could not balance himself as he crossed the boundary but before that he was successful in giving the ball to teammate Ben Allison. It resulted in Salt getting out for 27, with Pepper playing a major role in it.

Some absolute sauce from Pepper to remove Salt pic.twitter.com/rxsvgwnwf3

In another quarter-final match, Yorkshire defeated Surrey by one run in the nail-biting encounter that went till the last ball.

Surrey captain Will Jacks won the toss and opted to bowl first. Yorkshire scored 160/5 in their quota of 20 overs. Tom Kohler-Cadmore was the highest scorer for the side with his 62-run knock, while Will Fraine also helped the team’s cause with an unbeaten 32 off 14. Gus Atkinson was the pick of the bowlers for Surrey with figures of 2/28.

In reply, Surrey were limited to 159/7 in 20 overs. Jamie Overton was the top scorer for the side with a 40-run knock. In the bowling department, Yorkshire’s David Willey and Shadab Khan picked two wickets apiece.